Email your advice questions to AskMarion@onlyinamerican.com

[adinserter block=”3″]My church parenting group met at a friend’s home last week and we got onto the subject of how our children were doing in college. My husband and I’s son just finished his first year of college out East. He made great marks and joined a fraternity. Last week on social media, however, it looks like he and some of his brothers celebrated completion of their finals by going out on the town in those male rompers that look like baby suits. Just from all the posing and lack of women in all the pictures he uploaded on his Facebook website and really am worried that maybe he’s showing signs of homosexuality. A friend from our group referred me to you as an informant on all these new homosexual trends so hopefully you can shed some insight?

Thank you for taking time to write about this new trend. Many parents don’t know this, but on the street homosexuals use the word ‘romper’ as an acronym.  It stands for ‘Recruit Other Men’s Privates, Especially Real Straights’.

In the 1960s, elite Cape Cod homosexuals grew tired of the relaxed fit Chinos and Oxford button-down look, so commissioned fashion designers to create the romper to accentuate their classic homosexual bodies:  rippling muscles worn tough by the sea, the one piece fabric hugging their New England sun bronzed frames.  The outfits were meant to entice not only each other, but potential recruits to homosexuality who had ambiguous attraction to lean, toned Ivy league muscles.

Just a few weeks ago, the popularity of the male romper hit a crescendo in social media and it is not surprising to hear fraternities are buying rompers as a novelty gift and parading images about on social media. Hopefully I can assuage some of your fears by stating that clothing is not typically a causal factor of homosexuality, but it can be indicative of the lifestyle. You and your husband must be vigilant in sniffing out homosexuality in your son since your parenting instincts have already been put on alert. New studies have shown per capita homosexuality rates in fraternities is at all time highs, with over 30% of ‘bros’ being openly gay and at least 50% reporting they are at least ‘unsure or agnostic’ about their homosexuality.

When your son comes home on break, don’t be afraid to interrogate him and surveil his daily activities. Homosexuality has grown into such a bold force that parents must strike back at it with fervor. Look for the signs in your son: has he grown fastidious and obsessed with sculpting his body, always drinking protein shakes and talking about gains? This is typical of gays as their lifestyles require intense physical stamina with all the late night partying and exhaustive groping sessions. Is he eating healthy amounts of fatty meats and sweets, is he shying away from home-cooked meals? Is he always on the phone texting and uploading images to his social media?

Who is liking his posts, men or women? When you do his laundry, don’t be afraid to take a whiff. Are you smelling his normal scent, or perhaps that of foreign testosterone? Be bold. Ask him if he’s gay? If he gets defensive, take him to your church and let your clergy pray for him because that’s the best sign of all: defensiveness. Best of luck. 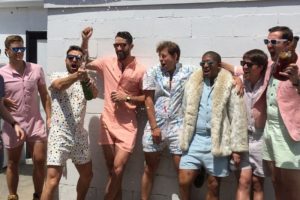