The CDC has confirmed 31 new cases of lesbianism in Texas after an Austin area theater aired Wonder Woman in 3D.

Ushers at the local theaters immediately called authorities as women in the crowd fell into some sort of primal mating rage, their pupils ‘dilating with passion, their heads wildly bucking back as they sucked estrogen-soaked air through clenched teeth and rubbing their chests as they eyed other women in the crowd.’

A male usher was severely injured after asking several women to stop removing their clothing and to go back to their seats.  They allegedly ‘had an enraged look of fiery passion in the eyes, pinning him down and doing all sorts of immoral things to his body.’

Over 50 acts of lesbianism were reported during the movie’s opening scene:  clench teeth panting, intense eye contact with flirty flicks of the tongue and exchanges of cerebral, knowing looks as thick-framed eye glasses were removed. First responders report pandemonium and the scent of spent estrogen awaited them on arrival.  Women were clawing each other’s clothing off, with those brainwashed by the movie being between 19 and 83-years old.

Scientists working on behalf the Christian Defense League of Texas confirm that the supple displays of lesbianism in 3D engage a primal portion of the female brain, located between the brain stem and the cerebellum.  MRI technique reveals that the female brain cannot distinguish between the movie and ancient times when women had to be dominant to protect their family units from hordes of other wandering females looking to attract their husbands.

The theory goes that the female body would engage in aggressive lesbianism to exhaust weaker women, so they would have no energy to tempt and reproduce with the most fit males, with whom they would subdue and exhaust with writhing submission like they did the male theater usher.

By the time the ample sun-kissed bosoms of Gal Gadot’s Wonder Woman entered the 3D screen, with her exotic accent and constant striking of muscle-tensed poses, even older women of the crowd had the ‘strength of four or five men as they wildly leaped over seats’ to have their fill of those they found attractive and uninitiated.  Scientists report that 2 out of five women lack the SRY-coding region in the brain that allows the movie to transform their brain to its primitive default state.

The Christian Defense League of Texas is warning women to not attend the Wonder Woman movie without a man and if they do, to not wear 3D glasses and beware that they may be subdued by activated lesbianism while in theater.  Husbands and boyfriends are warned that their wives may engage in a secret lesbian experience that she may not recall afterward, so prevention is best.  Either forbid them from buying a 3d Wonder Woman movie ticket and going to see the movie, or if they are defiant or curious, install a GPS-app on their phones that will alert you if they get close to a theater that is hosing an all-women showing of the movie. 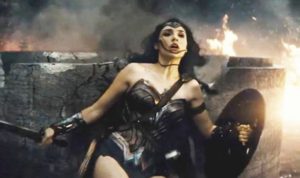 [adinserter block=”16″]
Email the author: marionuncmeier@onlyinamerican.com to share your story of how Wonder Woman 3D caused lesbianism in your life or other questions.