After years of deception, Barney has been defrocked and the liberal conspiracy to use the friendly, suspiciously athletic purple dinosaur to groom a generation to vote Obama has been revealed. 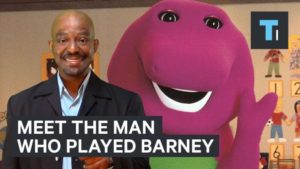 For years across suburban America, hapless parents turned their televisions to PBS where Barney, the friendly purple dinosaur, danced and paraded about followed by a troop of friendly, Canadian-looking youths dressed in creased pastel shorts and neatly tucked shirts who looked like miniature baby boomers.

Parents let their guard down and allowed Barney to sing and dance his way to their kids hearts, the memories of those childhood songs achieving the halls of nostalgia in all those minds.  Little did parents know that Barney was a fit and well-versed African-American man, whose Wayne Brady like charm and improv skills made Barney the perfect vehicle for unleashing subliminal psychological warfare on the American home.

What suburban mom does not love Wayne Brady.  Mothers raced to the stores to get their little singing and bumbling tots the latest Barney toy, while children were being reinforced with the sound wavelengths of Barney’s raised-pitched baritones that are not much different to listening to one of Obama’s speeches.

Fast forward twenty-years and young America was suddenly infatuated with a young politician from Chicago by the way of Kenya, a man who was hardly known but already loved by million of young voters.  In retrospect, Barney’s athletic prowess, penchant for song and dance and ability to rile a young crowd to liberal causes such as sharing your hard earned resources all while singing along in an eerie conformist ‘hivemind’ sort of way.