For years Christians and conservative Republicans have wondered why when they like and pray for something on Facebook, the end result is still a bad outcome.  Today operatives in Virginia uncovered an Obama-illuminati plot so sinister that if he were in office, Obama would be impeached and sent to the gallows.

Today on social media imagery surfaced of a large dump truck dumping undocumented paper documents info a landfill.  Investigators hired by the CDL of Texas confirmed that on close inspection, the documents being dumped contained Egyptian and Norse hieroglyphics and when converted to English, they had multiple mentions of “Illuminati, O-bama and other texts”. 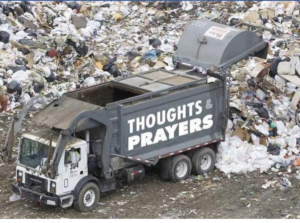 Moles formerly a part of the Obama Administration report that this practice had been in place since 2009.  Through ancient incantation rituals, Obama has found a way to make an expression of good will online be converted to a paper form, where it can be burned with incense oils and diverted as offerings unto the lords of pagan darkness.

Eyewitnesses report that dozens of people dressed in bizarre animal head pieces with apocalyptic bodies gather at the dumping grounds for these paperized likes and prayers, chanting in ancient languages and hailing Obama.  Sulfuric explosions take place and the air becomes stingy with oxygen and heavy with gravity, all signs that Obama’s dark ritual is taking place upon Earth.  Insiders reveal that when Obama himself shows up to these secretive rituals, sometimes also attended by Hillary Clinton, that he will say, “It is finished, the prayers are vanquished.”

Since 2009, Christian groups on Facebook have expressed confusion that despite their fervent clicking of like buttons to express they have prayed for a certain situation or cause, that nothing at all has happened.  Obama’s dark rituals explain what has been hampering everything and again shows how the Democrats are using liberal darkness to suppress the righteous.